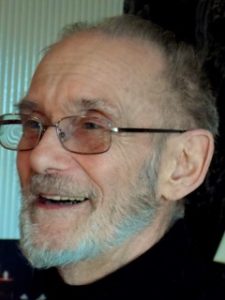 Our very own dear Fr. Peter fell asleep in the Lord after a long struggle with serious illness. His time with us was a great blessing for all the community. Memory Eternal!

Fr. Peter Ford fell asleep in The Lord on the evening of 9th July in Derby Hospital after acute respiratory failure. It was the culmination of a long series of crippling illnesses which he had met with his usual cheerfulness, fortitude and unflagging faith in his Saviour. For once it is no exaggeration in saying that he will be sorely missed by all who felt the touch of his gentle love.

Fr. Peter, in the world, David, had begun his adult life working for an insurance company in London, but having felt the call to serve Christ he was ordained as an Anglican priest, after a period of study at London College of Divinity. A series of appointments and livings followed and he eventually rose to become Canon Treasurer at Ripon Cathedral. However it was during this period that he started to become uncomfortable, and eventually very unhappy, with what he perceived to be the Church of England’s direction of travel away from orthodox Christian teaching and practice. Eventually he felt compelled in conscience to resign his ministry and leave the C of E.

For a while he involved himself with the “British Orthodox Church” which then had a small but high-profile presence in York. Eventually however, through further study and help from members of the Antiochian Community, he was moved to join the Antiochian Orthodox Church with its full expression of Chalcedonian faith.

Fr. Peter became a lay member of the Community of St. Constantine the Great in 2007 and his presence had an immediate effect on other members. That he was a man of great prayer was obvious to all, but he was in no way a remote figure. He had a wonderful gift of warmth and understanding for all people he met and was soon held in high regard and affection by the whole community. He was ordained to the diaconate in 2008 and then to the priesthood in 2012.

Unfortunately, by this time he was beginning to experience the series of very serious illnesses which became part of his earthly experience for the rest of his life and this had a significant impact on the way in which he could fulfil his ministry in the Church. However The Lord turned this into a great blessing for the rest of us in that he was able to offer us much more his time for spiritual and pastoral counselling. He became a spiritual father to some and his role as a confessor was highly valued by all members of the parish. I, too, was greatly blessed to receive his support and wise guidance in the period leading up to receiving my epigonation and I remain profoundly thankful to him for that.

Fr. Peter spent his later years as carer for an academic friend, Dr. Freddy Slack. They were always very welcoming to visitors at their house in East Keswick, near Leeds. Following Freddy’s passing and with increasing infirmity, Fr. Peter chose to live with his son Paul and daughter-in-law Sara in a house they bought together in Derbyshire. By this time he had become quite housebound, leaving only for hospital visits by ambulance. Nevertheless his faith and good nature shone through this time of adversity. He arranged his “monastic cell” as he referred to his room, with a substantial icon wall, which also incorporated a beautiful view over green pastureland. Here he maintained his prayer life with the daily round of offices and his long list of commemorations for all those who needed his prayers. He was also delighted to be able to meet Sayedna, who visited him en route to the 2016 Swanwick Conference. While Fr. Peter now lived too far from York for regular visits from old friends at St. Constantine’s, he was quite happy to receive phone calls and his good humour and faith were a spiritual tonic for many of us.

Unfortunately his health deteriorated so far that he had to be admitted to a nearby nursing home for 24 hour care. Nevertheless he bore it all with the customary patience and good humour, continuing his prayer life as best he could.

It always amazed us who knew him well how many close encounters with mortality he underwent during those final few years, and how with God’s grace, he always managed to survive and continue with his prayer and counselling. Fr. Æthelwine visited him at his nursing home from this year’s Annual Conference at Swanwick and reported to Conference that he seemed to be filled by a calm radiance, as if he knew his time was near and that he had complete trust in his Saviour.

Yes, he will be missed, but we trust that he is now among the saints and that his powerful ministry of prayer will continue for us all. Memory Eternal!